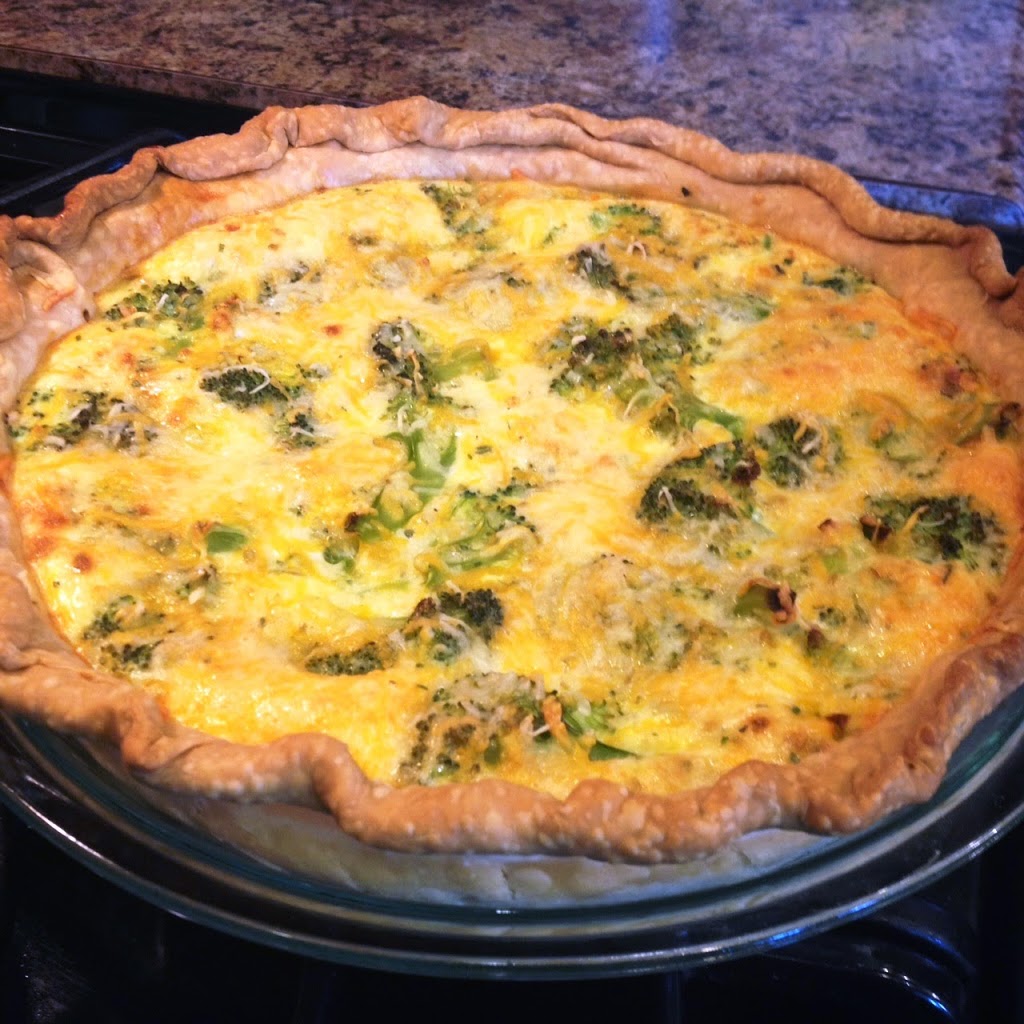 One 9″ pie crust (store bought or homemade–I used store bought because I was in a hurry.)
1 large head of broccoli, cut into bite-sied chunks
1 whole egg
3 egg whites
Spices/Herbs (I used 1 tsp Penzey’s Sunny Paris. You can use the herbs of your preference.)
2 ounces shredded cheddar cheese 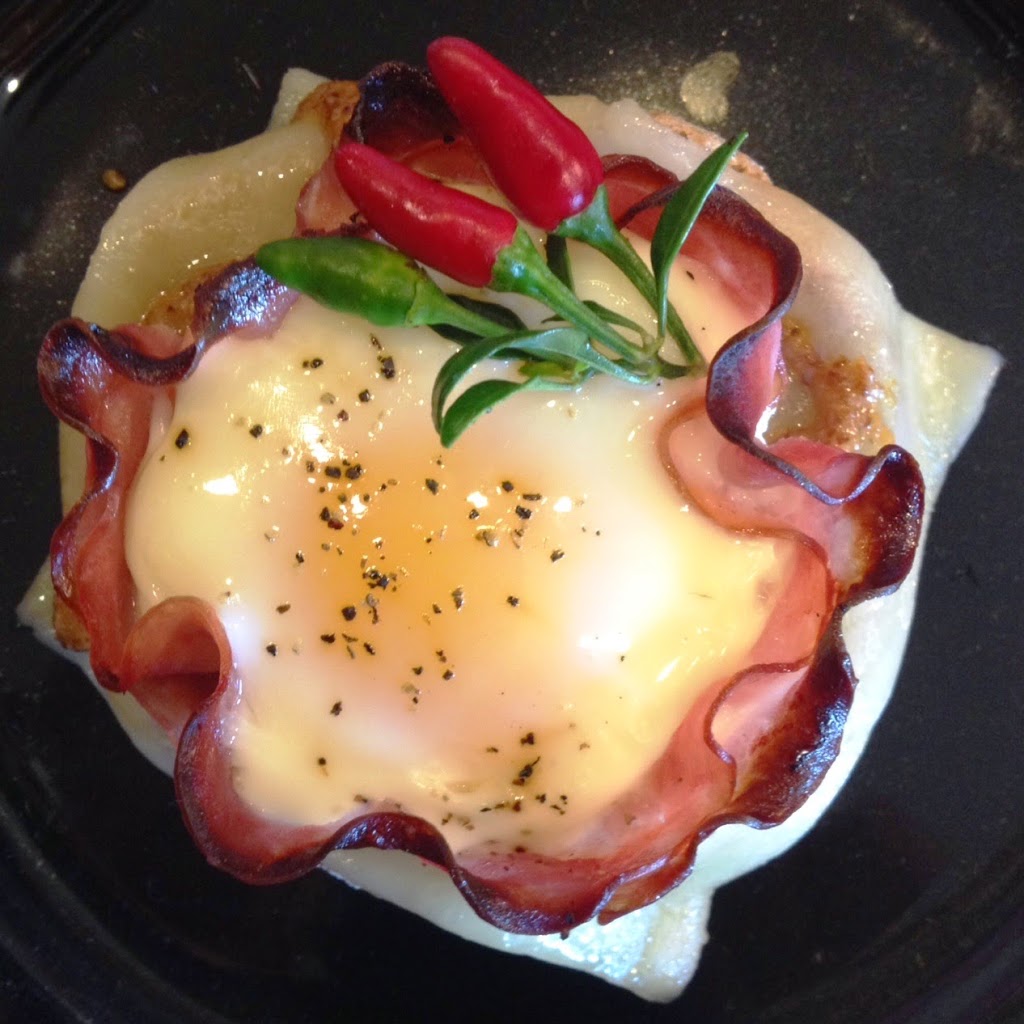 Bake for 15-18 minutes, or until the egg is set. Remove before it is fully cooked, it will continue to cook for about 3 minutes after removing.

When done the yolk should be thick and hot, but still fluid.

I served it on a toasted whole grain English Muffin, topped with a slice of horseradish cheddar and a drizzle of coarse German mustard. 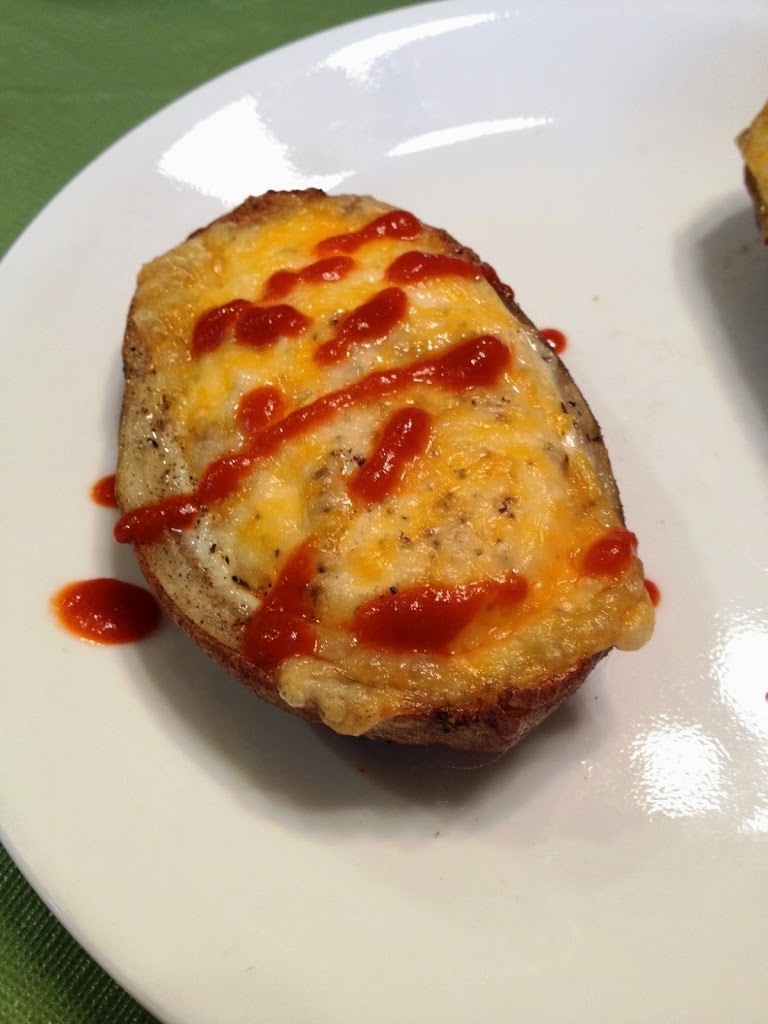 This is a great way to use a leftover baked potato. If you don’t have any left, you can easily microwave a potato in about 5 minutes, while getting your morning coffee ready.

Preheat oven to 450F
Cut baked potato in half the long way.
Scoop out most of the potato, leaving less than a 1/4 inch of potato.

Season with salt and pepper (if needed).
Crack an egg into the potato cup. You may not have room for all of the white (depends on the size of the potato. 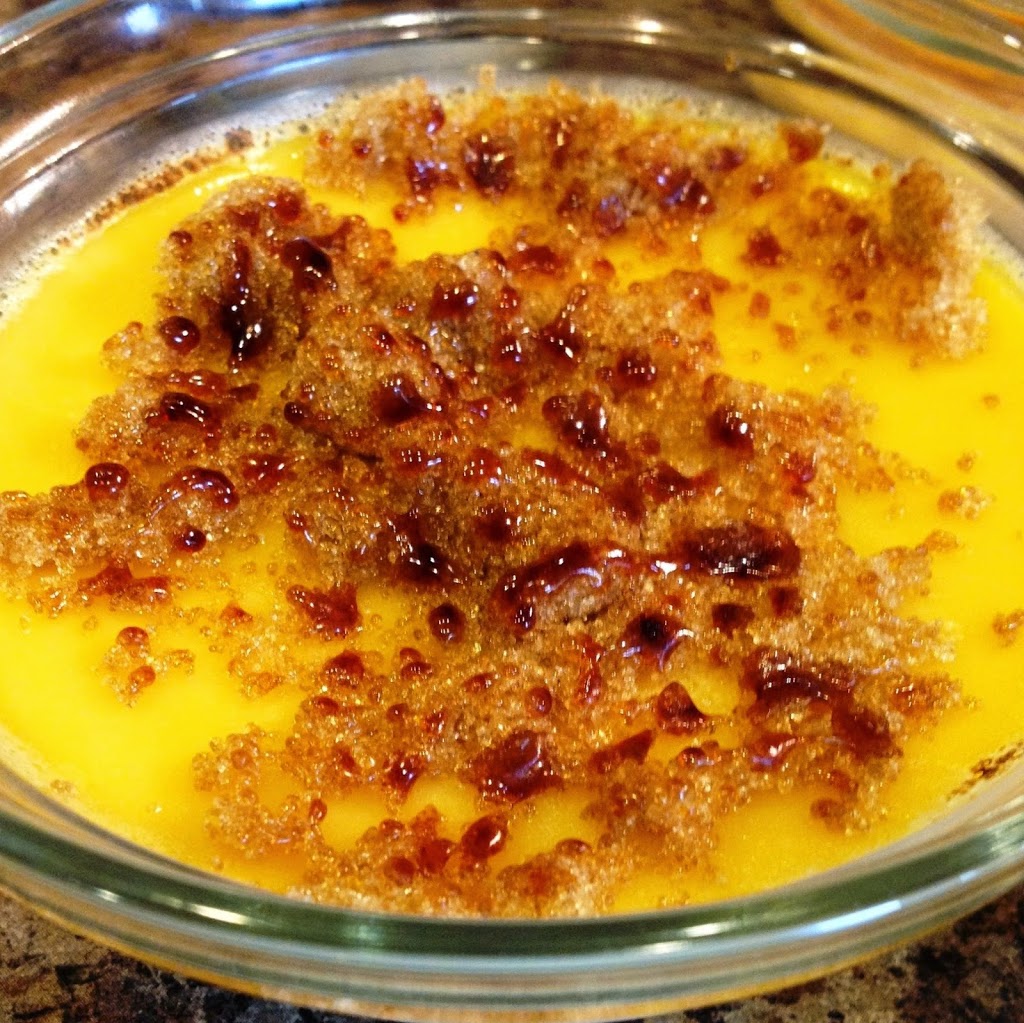 This is a lower fat, lower calorie version of the classic creme brulee, but it still has the requisite caramelized sugar crust.

If you listen to podcasts, and like what I have had to say here, go to my show Make Your Someday Today. When you go there, stop at the main page and move from Trevor’s Team to the Varsity Squad by signing up with your name and email.

I promise to keep your email private, and never spam you. I may send you messages of importance, but no more than one a week. And as a Varsity Squad member, when I release products and events, you will receive huge discounts. Thanks! 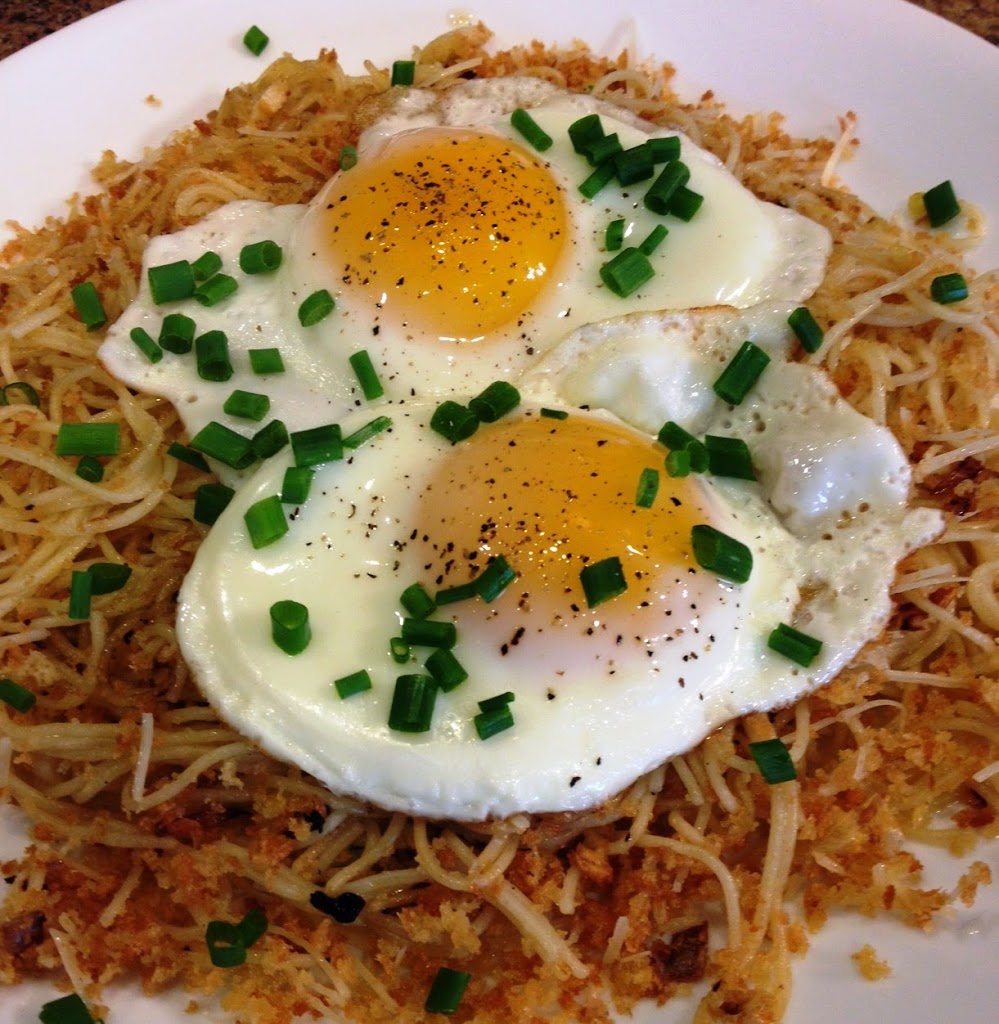 Angel Hair Pasta and Fried Eggs
Basic Instructions, you can vary as you wish: 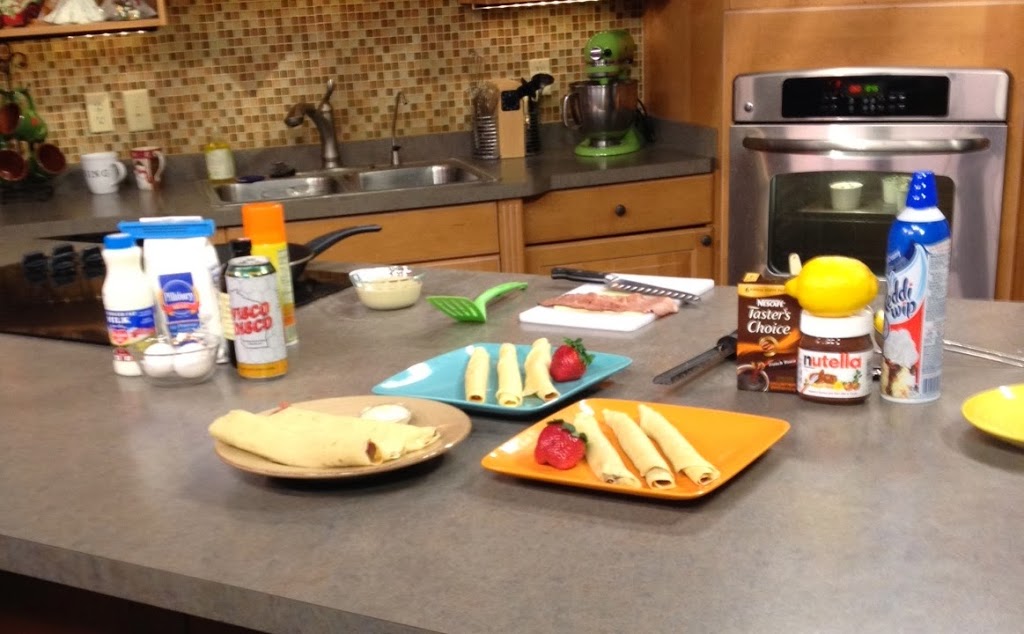 I was asked to cook on Green Bay’s WLUK Fox11’s “Good Day, Wisconsin!” this morning. I already told you that I was going to make Baked Eggs with Spinach and Feta, and a variety of Crepes on an earlier post.

I also promised to include links so that people who do not live in wonderful northeast Wisconsin can watch me if they want. I am a man of my word.

Here is the link to the Crepes segment. (The Baked Eggs segment isn’t linked.)

I will possibly be going back on in a couple months. Does anyone have any suggested recipes? I need them to be relatively quick to prepare, and appeal to a wide range of people.

Drop me a line with your ideas below. They do not need to come from my blog, but if they are not already on the blog, I will need a recipe or good idea of how it is prepared. I always make everything in advance to work out any kinks (and there are always a few kinks.)

A few stills that I took:

Almost ready for the crepes segment.

Baked Eggs are still in the oven.

Crepes ingredients. Brad Stillmank’s Wisco Disco adds just the right flavors!
Thank you to Emily Deem, Doug Higgins and the entire crew at WLUK Fox11 for the invitation and the warm reception. Everyone made me feel at ease and very welcome. That weekend crew is awesome! The fun interaction that you see on TV isn’t just for the camera. It is real! 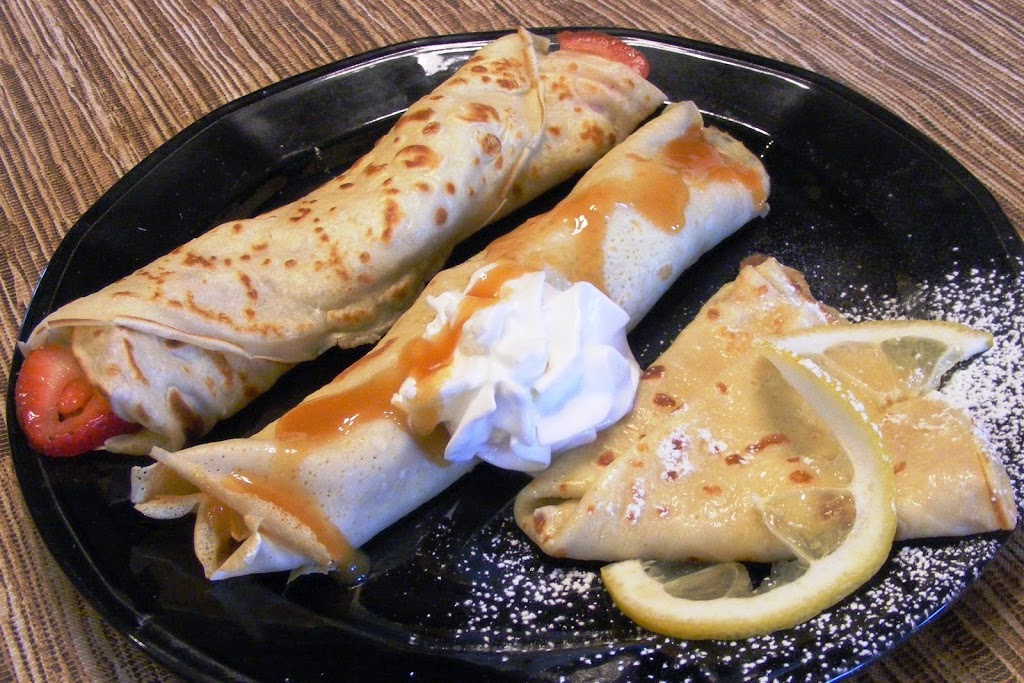 Crepes
From left to right: strawberry, nutella-strawberry, and lemon
Basic Crepe Recipe
Makes 12 crepes
6 oz milk
5 oz beer
1/2 tsp vanilla extract
2 eggs (room temperature)
1 cup all purpose flour
1/8 tsp salt
1.  Put first four ingredients in a large bowl. Using an electric mixer, mix for 30 second. Add the remaining ingredients and mix for another minute, or until thoroughly mixed and smooth.
2.  Cover bowl and refrigerate for at least 2 hours.
3.  Re-whisk the batter just before you begin frying the crepes.
4.  Preheat 10 inch non-stick skillet over medium-high heat. Spray with non-stick spray.
5.  With the skillet off the heat, pour 2 oz (1/4 cup) batter in the center of the skillet. Tip the skillet so that the entire bottom is covered.
6.  Return to heat. When the top begins to dry and the bottom is beginning to brown, flip using a wooden or rubber flipper. The edges will begin to curl away from the pan at this time.
7.  Fry the crepe for another 10 second. The crepe should be be very lightly brown.
8.  Remove from skillet.
9.  Add fillings, fold or wrap and serve -OR- stack with wax paper between layers for later use.
Nutritional data (per crepe, without any filling):
Calories:           64
Fat:                   1.2g
Sat fat:              0.5g
Chol:           36.5mg
Sodium:       43.8mg
Carb:                 9.2g
Fiber:                0.3g
Protein:             2.7g
Possible fillings are endless:
Sweet
A whole banana, sauteed in some butter
Nutella (or peanut butter) and banana
Nutella (or peanut butter) and strawberry
Any other fruits (fresh or canned pie filling) with whipped cream
Lemon juice and powder sugar
Greek yogurt and your favorite fruit
Your favorite jam/marmalade
Savory
Bacon and eggs (with a touch of cheese)
Ham and cheese
Cream cheese and smoked salmon
Shredded chicken and salsa
Thin-shaved beef with horseradish yogurt

Baked Eggs with Feta and Spinach 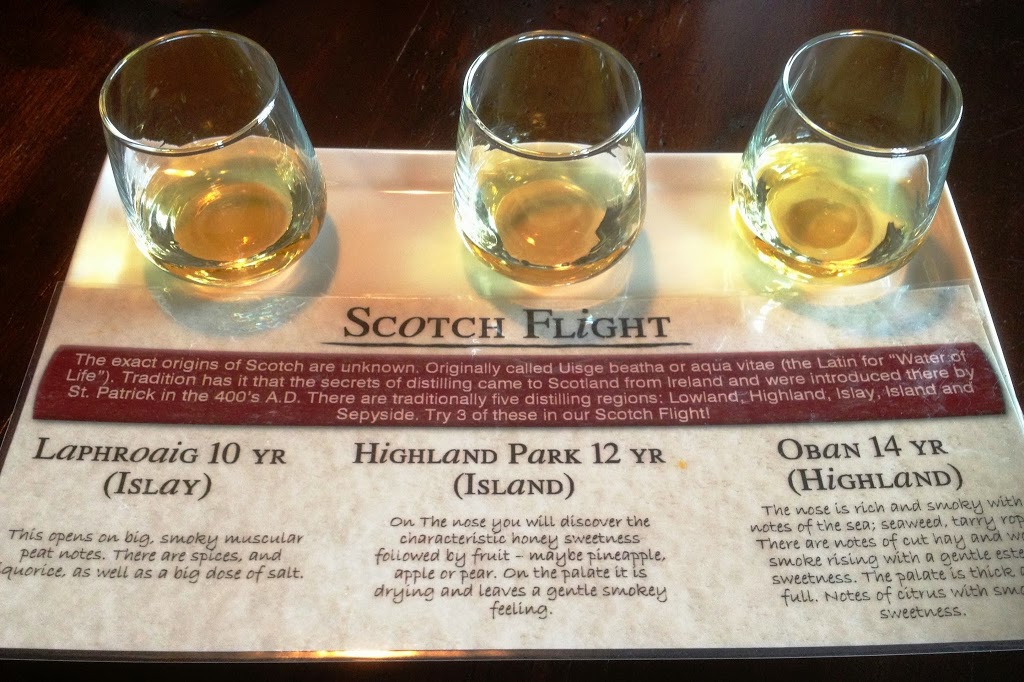 Just a quick update. I am halfway through the first semester, and so far my students are all successful! It has been a very busy two months, but life is good.

On Saturday, my wife and I went to a fantastic little place, The Bottle Room, a craft beer and wine bar. In addition to very nice food menu, they offer an astounding collection of craft beers from around the country as well as excellent imports. We both ordered warm sandwiches, but the real reason for the stop was the beverages. Tammy enjoyed a four wine sample flight, and I had sample flight of three single malt Scotches, with about 20ml poured for each.

From right to left, the Oban 14yr was the lightest. A lot of honey in the nose, with some grassy flavor with hints of citrus fruits. It was good, and I had been very curious about trying a bottle of it, but now I know that I won’t bother with it.

The Highland Park 12yr was very nice with smoke in the nose and the flavor. There was definite pear flavors and it was much less sweet than the Oban. it was good, and I would consider buying it.

The youngest of the flight, the Laphroaig 10yr was like being hit in the face with a bale of smoked peat wrapped with fresh seaweed. It had a powerful smokey flavor with a medicinal character (in the brewer-speak of a beer judge, it was “powerfully phenolic” and also a distinct saltiness. It was bold. It was really “in your face.” And I will buy that again, because that was incredible!

Sunday morning was a relaxing day. I decided to make Baked Egg with Feta and Spinach. Unfortunately, I didn’t have any feta cheese, but I did have some crumbled bleu cheese, so I subbed out the Greek feta for some American bleu.

And discovered that bleu is too pungent for this recipe. The flavor overwhelmed everything else, even only using two tablespoons (1 ounce/28g) for a batch of four eggs.

Oh, well. It was a learning experience. Not everything will always go perfectly, and that is okay. If you never try, you won’t learn and grow. As for the remaining eggs, we threw them out. In our world, if the food is not “worth the calories (or points)” then we simply won’t eat it. We eat well because we only eat food that is good enough to justify expending my food budget calories.

And the next two times we go to the Bottle Room (and we will go again) I am going to try the Scotch Top Flight (Glanmorangie 12 yr, Lavagulin 16 yr and Glenlivet 18 yr), and the Bourbon Flight (Buffalo Trace, Angel’s Envy and Booker’s.)

Question for everyone: Of the various liquors I mentioned, which have you tried, and which is your favorite? Let me know below. 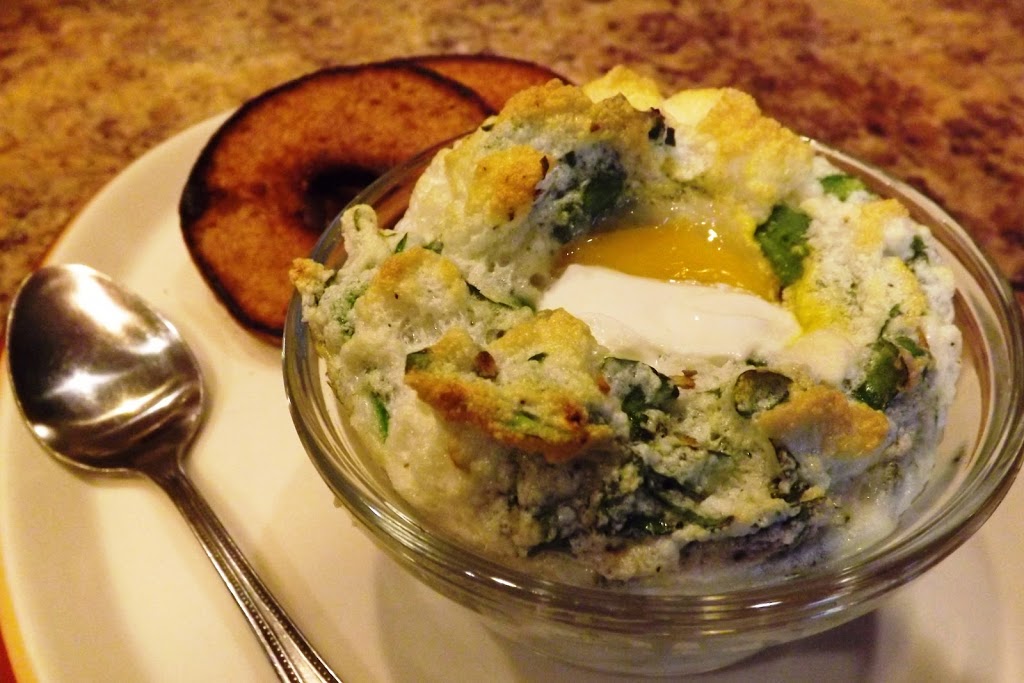 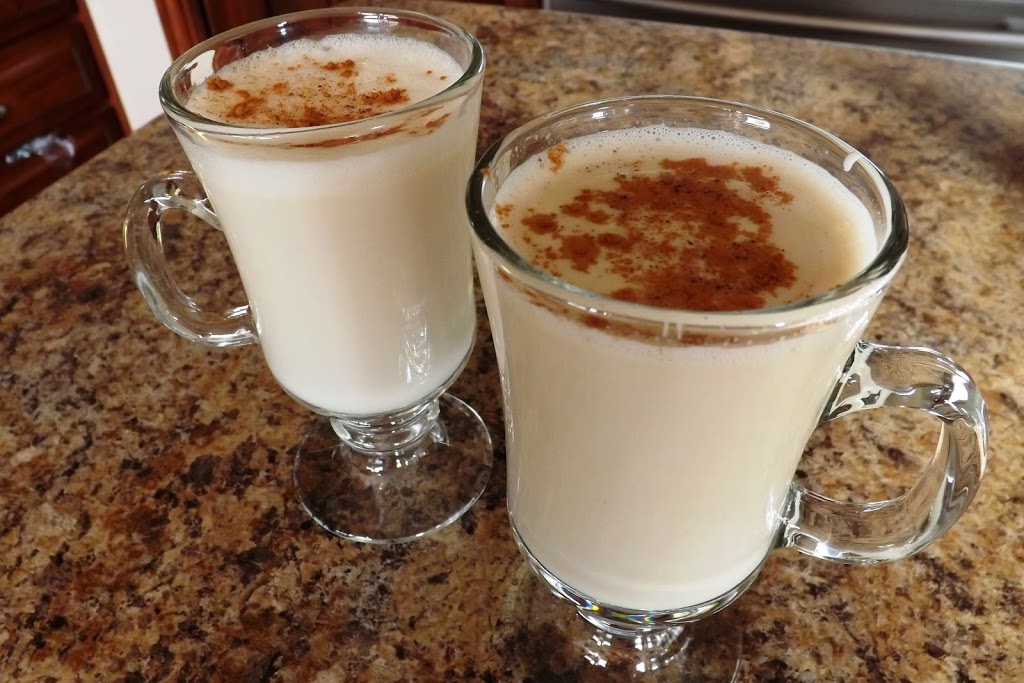 This tasted good, but personally, I didn’t think it was rich enough. Maybe it needed an additional egg or two, and some cream would help it (but then the calories would skyrocket!) However, for a once-in-a-while treat, the extra calories may be worth it. If I try that adaptation, I will post the results here.