In this show, I am not talking about just any food, but food kryptonites. Those are food that will trigger a binge. These are foods that you truly cannot “eat just one” because once you start it as though someone opened the floodgates of hunger and you won’t stop eating until it is all gone or you become physically ill. (In my case, I am talking about potato chips. Or “crisps” if you are in the UK.) 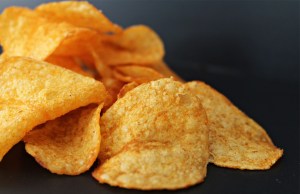 If you have food in your home that causes uncontrolled cravings and temptations, the remedy is simple. Throw it away. Really. Pitch it in the garbage and then don’t buy it again.

But you probably will not do it. I know that there are two basic objections:

Since you’ve already paid for it, the money is gone whether you eat it or throw it away. You don’t get a refund for eating it. You will only get fatter. So why eat it and unravel any success you may have achieved just because you’ve already spent money on food that is causing your problems? 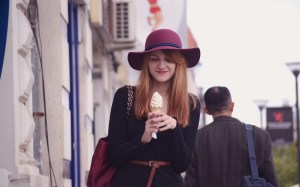 The second objection is more difficult, but not really. Again, I’m not talking about all the food in your house (I hope!) but rather one specific food. Let’s assume your trigger is ice cream. And you live with others–maybe your significant other, or children or parents. And they like ice cream, too, but don’t struggle with it as you do.

Be selfish, in the good context. Take care of yourself. We are talking about a food that is not vital to life. And we are not saying that you go to your local supermarket and demand that all ice cream be removed. Just get it out of the house. If your family members really want ice cream, they can go buy some for dessert. (And if they are unwilling to make a separate trip to buy it, they really didn’t want it too badly, did they?)

But here is a comparison. It is not a great comparison, but it will suffice.

Let’s make an assumption that you discover someone in your home has a bad drinking problem. It’s affecting their health, their job, and everyone’s life. Would you dump al the beer, wine and liquor in the home to help them?

I’d guess that you would.

Well, in my earlier example, ice cream is having a similar (albeit much slower) effect on you as the alcohol on your family member. As we gain weight and get older, we will become more of a burden on everyone around us. Obesity makes other diseases worse, and can actually cause diseases (heart disease and diabetes to name two.) If you would willingly give up all alcohol to help a family member with a disease, can’t you ask them to give up ice cream?

It’s not like they can never have ice cream, just as you could still go out for a wine after work. They just can’t bring large containers of ice cream home.

Like I said, it is not a totally equivalent comparison, but I think you understand my point.

All images and videos on Pixabay are released under the Creative Commons CC0. Thus, they may be used freely for almost any purpose – even commercially and in printed format. Attribution is appreciated, but not required.

All images from LoseIt are mine, and cannot be used without permission.

Voiceover courtesy of Matt Young. Matt is a professional voiceover artist. If you have any need of voice-over work, for your podcast, radio spot, or whatever, you can reach Matt by a variety of methods. He is on LinkedIn. On Twitter. And Google+. Follow his Facebook page to learn how to better use social media. Matt was also my guest on MYST 54. Give his story a listen.