So, backyard chickens alone won’t disrupt a weight loss plan. But if you decide to get backyard chickens, and then other life events strike (and nothing that is considered a “strike” is usually good) then the combination can roll into a mess.

That’s what happened to me.

I received three new chickens in April. Coop and run construction took me six weeks instead of a few days. “Generalized work stressors” for all employees of our facility began in April with monthly lists of job eliminations. At the end of June, we found out that our 12-year-old pug was terminally illness for your beloved dog. Lastly, then the “generalized work stressor” became a personal job elimination.

All of that began in mid-April and is still continuing (as the job search is ongoing.) All of those emotional drains reduced my ability to continually make good eating choices. All my weight loss progress that I made between February 2018 and now was reversed. And a relatively large part of me doesn’t really care. There simply are too many demands on my mental and emotional reserves.

And I know it’s happened to you at some point, too.

So, how to break the cycle?

More of that in the next episode!

Here are a few pictures of the coops and chickens. Here is a link to my YouTube page with more chicken-related videos. 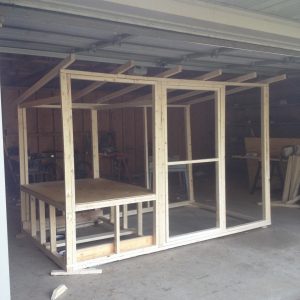 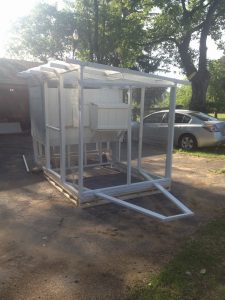 All photos are my personal photos, and cannot be used without permission.

Voiceover courtesy of Matt Young. Matt is a professional voiceover artist. If you have any need of voice-over work, for your podcast, radio spot, or whatever, you can reach Matt by a variety of methods. He is on LinkedIn. On Twitter. And Google+. Follow his Facebook page to learn how to better use social media. Matt was also my guest on MYST 54. Give his story a listen!