You can use almost any vegetable in this (spring peas, tomatoes, green beans, etc).

Also, there are three types of quinoa, white, red and black. I don’t think there is any nutritional difference. I buy the red because it tends to look better when in a dish. 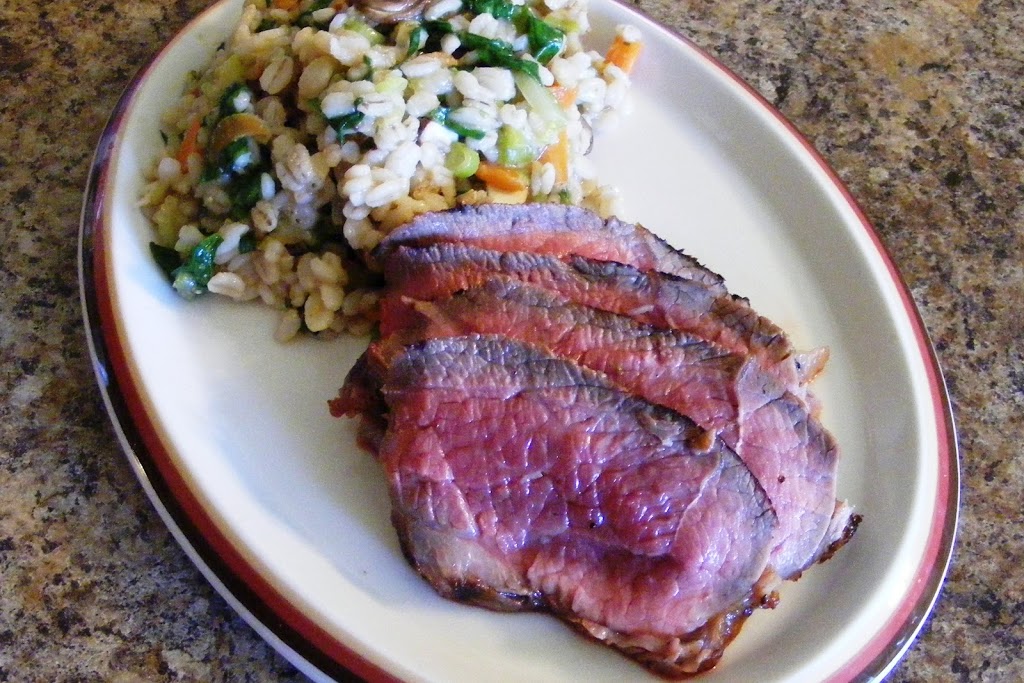 Cover and let cook until the water is mostly absorbed (12-15 minutes, or until the barley is soft and chewy.)

Preheat the grill on high for 5 minutes. Clean grate.
Remove steak from marinade, blot dry.
Season with salt and pepper (if desired.)
Grill over direct medium heat, 7 minutes per side.
Remove from heat and cover loosely with foil while finishing the meal.

While the steak is on the grill, heat a large non-stick skillet over med-high heat.
Add 1 tablespoon olive oil, and all vegetables except spinach
Saute until warm (4-5 minutes) Set aside.

The barley should be done about the same time as the steak. While the steak rests, place chopped spinach in bowl with dressing. Pour barley over the spinach (if there is water remaining, add it to the bowl.) Stir to combine. Add sauteed vegetables to the barley. Stir to combine.

Slice the steak across the grain, in slices 1/4 inch thick.

This can be made using other steaks or roasts. I will not provide nutritional data for the meat since that will vary based on what you grill.

A word about the salad recipe. We, as a family, did not really like this recipe. The lemon flavor was too aggressive and masked everything else. My lemon yielded almost 1/2 cup of juice. When I make this salad next, I will use only 4 tablespoons lemon juice. Or I might substitute a vinegar for instead of the lemon juice, letting the lemon zest provide a hint of citrus flavor. (I think balsamic vinegar would work very well.)

A word about the steak. I cooked it to rare, as you can see in the picture. Not everyone like their meat rare, but my family prefers that. If you want it medium-rare, grill it 8-9 minutes on a side. Medium will be 9-10 minutes on a side. As always, the times will be dependent on the heat of the grill and the thickness of the steak. (I don’t think a good piece of steak should be cooked more than medium.) 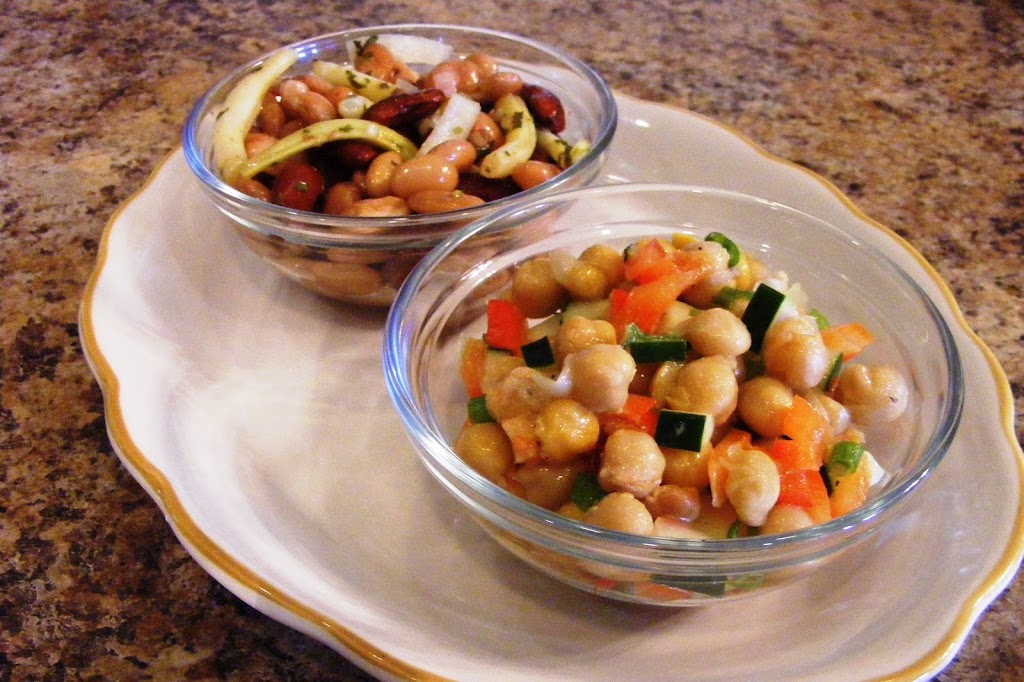 1.  Prepare dried beans according to package instructions. (If using canned beans, pour into colander and rinse with water.)
2.  Place all ingredients into a bowl, and mix.
3.  Refrigerate overnight.

This salas is a bit more sweet than the first salad.

1.  Mix sugar, olive oil and vinegar.  Stir until sugar is dissolved. (Warming in the microwave will help.) Set aside.
2.  Prepare all beans according to label directions. (If using canned beans, pour into colander and rinse with water.)
3.  Trim green (or yellow) beans, and cut into 1 inch pieces.
4.  Bing 1 liter water to a boil in a 2 liter pot. Blanch the beans in the boiling water for 2 minutes. Drain water off.
5.  Combine all beans with onion.  Pour dressing over, and mix. Refrigerate overnight.
6.  Add black pepper to taste.

Other option for this salad: 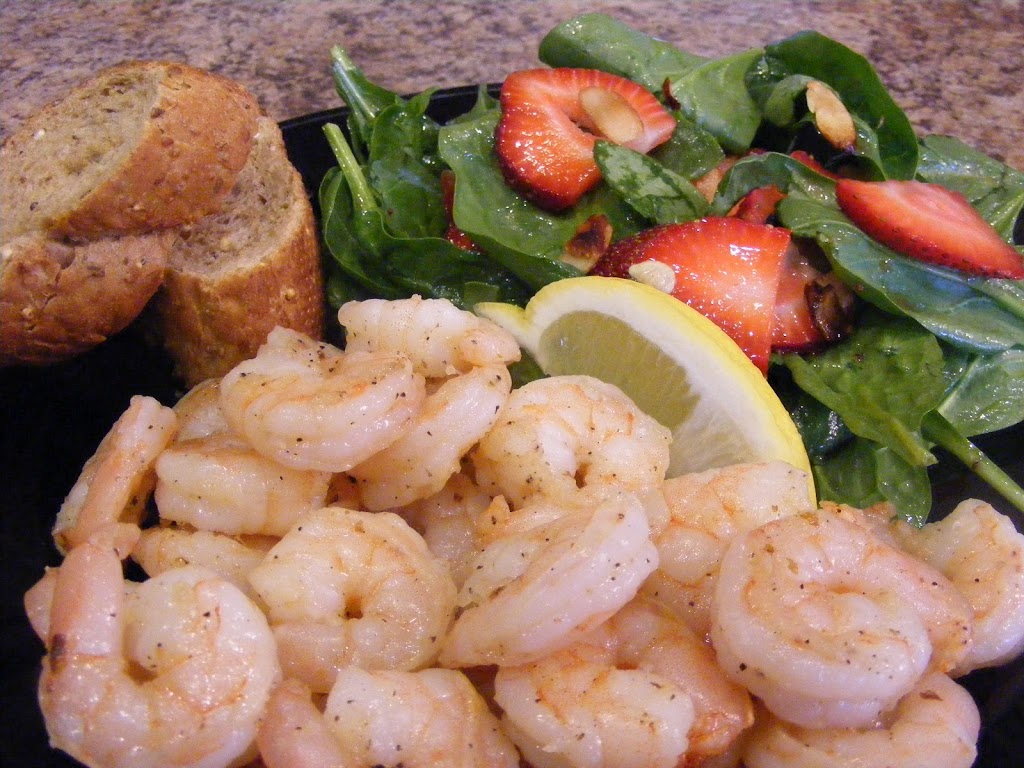 To toast the almonds, heat a non-stick skillet over medium-high heat.  Add almonds and saute dry (no oil.) Toss occasionally. The almonds are done when they begin to turn light brown.

Pour dressing over spinach and strawberries. Toss to coat.

This salad does not make a good leftover salad. The spinach wilts, and the strawberries get mushy. Eat it freshly made.

I used 2 pounds of large shrimp (purchased peeled and deveined for ease of preparation), thawed and put in a Ziplock bag. I added 2 tablespoons olive oil and tossed to coat all shrimp.

I preheated my grill and place a vegetable basket on the grill.  When it was hot, I coated it with canola oil, and put the shrimp in the basket. I lightly seasoned the shrimp with Penzey’s Sunny Spain.

I put the lid on the grill, and let them cook for 2 minutes, then stirred them around. I repeated that three time. The shrimp are done when they are white and no longer translucent. (Small shrimp cook faster.) 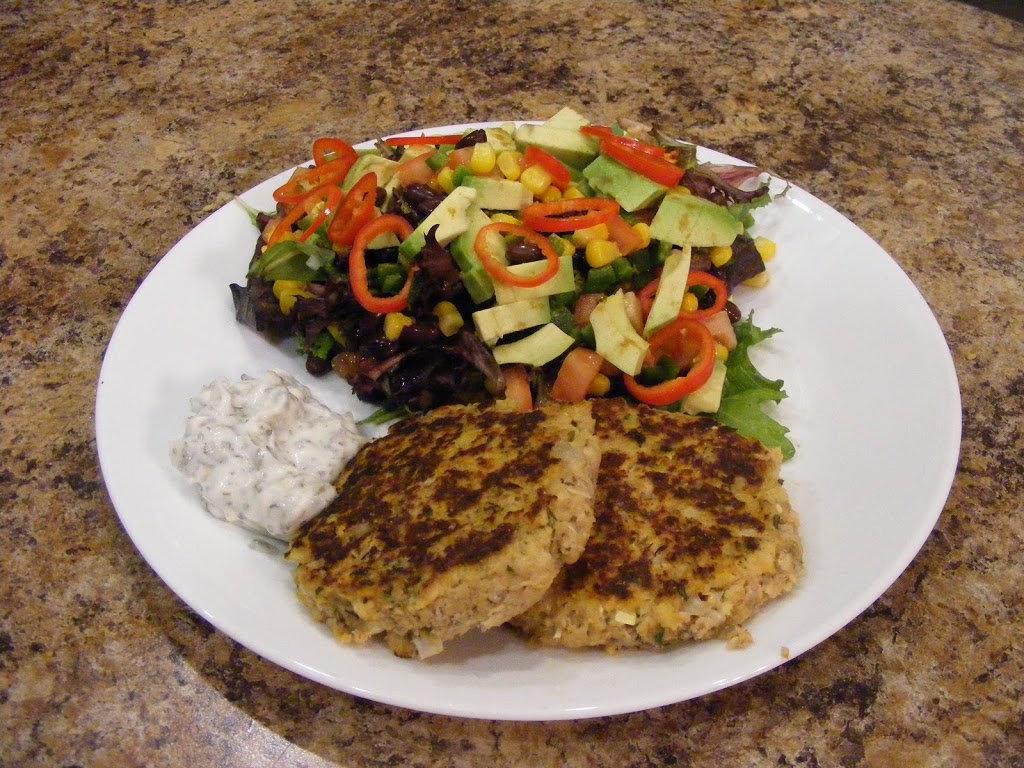 Speaking of hungry, this was last night’s meal. Two pan-fried salmon patties, with a bit of basil mayo and a Mexican chop salad. With the homemade vinaigrette, the entire meal was 626 calories. I don’t know how much the meal cost, but it is not much. A can of salmon is inexpensive and full of protein and healthy fats. A couple eggs, a bit of onion and some bread crumbs. The salad was made with ingredients that were not needed in recipes from earlier in the week, and just sitting in the fridge. The basil mayo is prepared Hellmann’s and dried herb.  I had the meal made, start to finish, in 15 minutes.  Inexpensive in time, money and calories.

Mix together with your hands. It should be wet, but not dripping, and should form into a ball and hold its shape.

Approximately 1/3 cup per patty.  Scoop, form into a ball and press flat. Heat a non-stick skilled with a little olive oil. Place patties in skillet on medium for 3-4 minutes per side. Patty should be nicely browned, but still moist inside. Serve with your favorite tartar sauce or this basil mayo.